Saffron Walden Baptist Church is regularly in the local news.  Recent articles are below:

Good coffee, tea and biscuits, with cheese and ham toasties - a light breakfast enjoyed by visitors to the Mind in West Essex breakfast club drop-in. Small, friendly and informal, the breakfast get-together is a much appreciated safe place for local people who are living with mental health issues. Getting together with other people, having a chat or a game of Triominos are the kind of low key activities on offer. These gatherings are well attended and appreciated by a number of regular attendees. A few years ago the long-running breakfast club looked like it would fold due to lack of resources. The Baptist Church stepped in and suggested a partnership arrangement to keep the drop-in available. Martin Baker, a Peer Support Worker with Mind in West Essex, is a regular visitor to the drop-in and able to offer support and advice if required. The Breakfast Club is every Tuesday from 09.30 to 11.30 at the Baptist Church hall, by the war memorial. 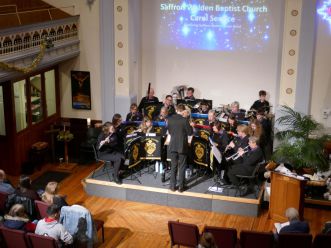 Saffron Walden Town Band led the carol service at the Baptist Church on Sunday 22 December, playing not only the carols sung by the congregation but also a medley of favourite Christmas tunes before and after the service. Donations were invited for a local charity, the Stroke Association, and an overseas one, African Health Foundation, which raises funds for Rose Ananse Memorial Hospice Care, a registered NGO with the Ghana Government which provides palliative care in the community in Kumasi, Ghana, where such care is virtually unknown. It is recognised by the Ghana Dept of Social Development as an organisation which "renders selfless social services to mankind". All the UK trustees provide their time freely and have an interest in and knowledge of Ghana - one of whom, Malcolm Johnston, is the husband of the minister, Sue Johnston, at Great Sampford Baptist Church. 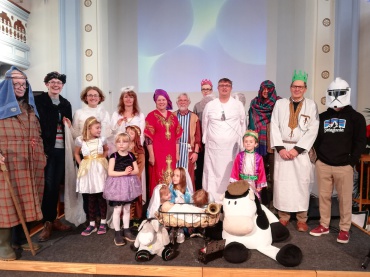 ‘Dress up, join in and then go on to be part of the continuing story today’ was the theme of the retelling of the Nativity at the Baptist Church, which included all age groups from 4 to 80+ (and an interesting and  unusual interpretation of Herod, on the right!) 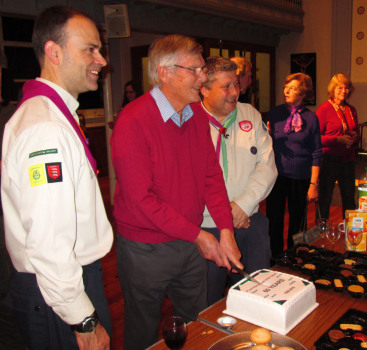 A celebration of the 60th anniversary of the 5th Saffron Walden (Free Church) Scout Group was held at the Baptist Church recently. Many people associated with the Beavers, Cubs and Scout sections over those years came together to remember the activities they had been involved in over the years, to look at photo albums of camps, hikes, sleep outs and campfires -and to marvel at the energy and commitment of their younger selves, as well as to meet the current inspiring leaders. The 5th was originally set up by the Baptist, URC and Methodist churches in Saffron Walden; the various sections now meet at the URC and Baptist churches and still have church support. A splendid cake recorded the Beavers, the two Cub packs (Aztecs and Incas), the two Scout troops {Apollo and Orion}, and the Scout troop Scorpius more recently established at Sewards End. 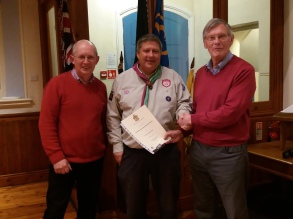 Around 90 young people are currently part of the 5th group, which includes girls and boys. A certificate commemorating 60 years in Scouting was presented to Neville Wilson, who was one of the original founders and leaders, by Mark Benfold, District Commissioner, and Ken Lowe, Scout Leader.

The dramatic photos of floods around Britain recently help us to understand more fully what the disaster of Cyclone Idai was like in Mozambique where emergency services are much less available.

Liz and Sergio Vilela, visiting Saffron Walden Baptist Church on home leave from Mozambique with their two children, described how people had had to sit in trees for five days before being rescued when the terrible winds of the ‘night of terror’ struck earlier this year, causing the rivers to burst their banks over a massive area, whole areas of housing to be destroyed and the only road to the capital cut off. The church Liz and Sergio attend had its roof ripped off and all the contents destroyed. Sergio is now managing project teams to aid in the rebuilding, funded by donations to BMS World Mission, in particular, the churches which house the PEPE pre-schools where Liz leads training and child protection. Liz also described her work as a play therapist. She said: “In a local culture of strict discipline, obedience and often physical punishment for misdeeds, children are often very passive; we create an environment where they feel safe and encourage them to explore for themselves. It’s great to see them grow in confidence and emotional development”.

Practical help for the homeless

An early Sunday morning recently found Mike and Lynda Turner driving up to east London with a car full of clothes, food items and other necessities to deliver to the Whitechapel Mission, a charity established 143 years ago to serve homeless and marginalised people; it believes everyone deserves a chance, regardless of their background, race or religion.

East London is an area of considerable need reasonably close to Saffron Walden and Saffron Walden Baptist Church supports their work with a delivery of goods three times a year. The Mission is open every day of the year and sees as many as 300 homeless and vulnerable men and women each day, all without public funding. By encouraging each person to address the issues which caused their homelessness, they are helped to gain the skills and confidence to make lasting changes in their lives.

Mike, who is a Boys’ Brigade leader, said: “There was a national request to the BB in the early 1990s to engage with the work of the Mission and the Baptist Church also became involved, after a talk by the Director on the Mission’s work with street people. Older BB boys have had a tour of the premises and have learned something of the plight of people who find themselves without a roof over their head for all manner of reasons - and this is currently a big problem again in London.

It’s always a moving experience to visit Whitechapel with the church’s donations – the dedication of staff and volunteers is great to see as they show love and support to people going through very tough times.” 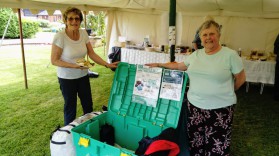 Shelterbox will be the recipients of a donation of over £1800 as a result of a charity BBQ held last Sunday at Pinkneys Manor, Wimbish, by Saffron Walden Baptist Church, for some 60 people from the church and the village. Shelterbox provides emergency shelter and tools for families who have been robbed of their homes by natural disaster or conflict and is working for a world where no family is left without shelter after disaster. On show at the BBQ was an example of the large strong container that is filled with survival essentials, which will differ according to the need of the crisis. The church is grateful to Burtons the butchers for their kind support of the event and to everyone who donated so generously.

Events pass out of the news quickly, so it is good to hear a follow-up account of the aftermath of the devastating Cyclone Idai. Liz and Sergio Vilela, two former members of Saffron Walden Baptist Church who work in Mozambique with BMS World Mission, helping with community preschool projects and mission training for nationals, talk about their recent experience

Liz and the children re-joined Sergio in Beira about 1 month after Cyclone Idai hit, with trepidation as to what it would be like. In particular, knowing that there were lots of cases of cholera and wondering how to keep the children safe from illness. The city looked different and some places unrecognisable, mainly because of the lack of trees. However, life surprisingly got back to normal relatively quickly for them as a family. Their house suffered very little compared to others and they now have electricity and clean water. However life is still far from normal for many and they are trying to find the best ways to help those who need it most.

Liz said “We have been distributing food kits through Baptist churches and it is very challenging to see how needy the people are. Their gratitude is something that has affected us. When we went to make food deliveries to a church 40 km away we opened one of the boxes to show what was inside. The women began to sing and dance a song in their dialect that means ''if you are blessed, don't forgot to thank God.'' It was beautiful and I confess that my heart was moved and some tears were spilled.”

“Last week I, Sergio, and a few others went to visit Buzi, one of the regions most affected by the Cyclone's 200 km per hour winds as well as days of rain. To make matters worse, the river flooded its banks and most of the town. You may have seen photos of Buzi on TV, with people stranded on roof tops and in trees waiting for help to arrive. Unfortunately many lost their lives. The Pastor of Buzi Baptist Church and his family found shelter in an old lorry and waited there for six days until the water receded with little food and no toilet, but they didn't give up hope. Most of the people in Buzi lost almost everything so it was great to be able to distribute clothes, food and some Bibles.”

The disastrous consequences of Cyclone Idai in East Africa have been brought home forcibly to Saffron Walden Baptist Church. The church supports two former members who work in Mozambique, helping with community preschool projects and mission training for nationals.

Liz and Sergio Vilela are now back in Mozambique after being on leave at Sergio’s home in Brazil when the cyclone struck. Liz said: ‘The worst moment for us was when friends were telling us that their windows were breaking and water was coming into their houses, and all they could hear were tin roofs blowing in the wind and glass breaking. Then the power went out, there was no signal and we had to wait a few days to know that they were safe.’

They cut short their holiday and Sergio has gone home to Beira to help their local partners in assessing the situation and the best way to assist. Liz has stayed in Maputo (the capital) with their children, Chloe and Joshua, for the time being.

The one main road out of Beira is now fixed and Beira is accessible again, so mineral water and food are arriving back in the shops that are open. For people that have money and a house, life seems to be more liveable now, but for the poor the issues of dirty water, housing and health conditions, are still very real. There are already cases of cholera and other diseases. There are lots of displaced people on the streets and therefore lots more police around.

Liz said: ‘A people that already had near to nothing now have absolutely nothing and not even the land that they lived off. They need to rebuild their whole lives again which will take a very long time. However there is a lot of aid coming in too from several countries, which is great. ‘

Liz grew up in Saffron Walden and met Sergio in Brazil whilst Sergio was a mission worker with Youth with a Mission. After marrying, they worked in Brazil for a year before spending three years as youth pastors at Saffron Walden Baptist Church, where Liz’s father Malcom Brown had been a former minister. They moved to Mozambique in 2013 with BMS World Mission.